"Narcohumanism. Pharmacies and narcotics" in Bòlit. Center for Contemporary Art

From March 11 to May 22, the Bòlit. Girona Center for Contemporary Art presents the exhibition Narcohumanism. Pharmacies and narcotics in current artistic practices, the exhibition proposes an extensive experiential map, as well as a documentary, of consumer practices and the subjectivities they generate: their recreational uses, but also their work; sensitive life, and the power systems that determine it; the narcotic effects, and with them the human affections.

Narcohumanism is presented as a research on the maps and cartographies that trace drugs, legal and illegal, tolerated and consumed clandestinely and the consequences they have when it comes to creating different subjectivities, intimacies and forms of community. .

From the optalidons traditionally consumed by grandmothers to MDMA, there is a long list of substances that, according to the commissioners' thesis, complete us, as it gives the impression that self-sufficiency is not enough to develop. working life, affective sex life, and all the other responsibilities of emotional capitalism or what Laurent de Sutter calls Narcocapitalism.

This exhibition aims to give another twist to the term humanism, another meaning. The participating artists have researched the different ways in which the trafficking of substances and their circulation involve a whole political, gender, financial and other culture. 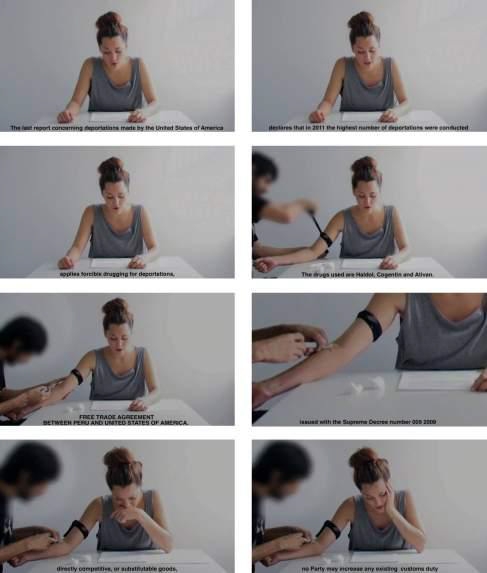 Along the route of Narcohumanism we find this system of investments and translations expressed in psychedelic inflections that alter perception (Rapapawn), and also in acts in which the museum space is invaded and transformed by the nocturnal spirit and Dionysian of the party (Ana Laura Aláez). The consumption of ecstasy also has its monument or noonument (Joan Pallé). The autobiography becomes a clinical self-portrait (Benzo). At the same time, consumer practices, tolerated, illegal or illegal, have all their resonances in political terms, whether it is the policies that penalize migration processes (Daniela Ortiz), which determine the modalities of meeting and association. sexual intercourse (José Begega) or those who create gender identity through experimentation (Chimera Rosa).

In the cracks between interiority and exteriority, the amazing experience incorporates a spatial and geographical dimension. Mapping the territories — paradisiacal, infernal, or purgatory — and presenting them as landscapes of pressure subjected to the forces of (narco) capital is the aspect that brings together various projects that teach us the city illuminated by lights of blister (Julia Montilla), the dynamics of buying and selling in the catacombs of the deep web (Daniel G. Andújar) and the glittering and sinister architectures created by the cartels, from Cali (Luis Molina-Pantin) to Galicia (Jacobo Bugarín). These inflections, and the previous ones, take place in the light and sound context generated by Óscar Martín, who has created a surrounding installation where visitors to the exhibition become an experimental subject.

CONTINUE OR CHANGE. REINVENT AND REBUILD

DART WILL INAUGURATE ITS 6TH EDITION WITH THE PREMIERE OF "CORRECCIÓN. IGNASI ABALLÍ"